WHAT IS A HYPO ALERT DOG? 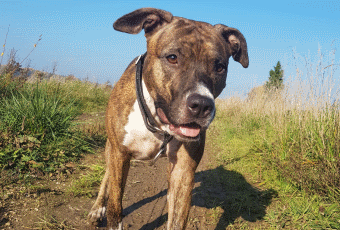 Hypo alert dogs are dogs that are specially trained to detect, by sense of smell, low blood sugar (hypoglycaemia) of a human being and to signal (to mark) it to him/her. The dog’s owner shall decide what the exact signal will be but usually the dogs are trained either to nudge the person with the nose or scrape with the paw. High blood sugar (hyperglycaemia) is not as dangerous condition as low blood sugar, so the dog is not specifically trained to detect the smell of hyperglycaemia. However, most hypo alert dogs will start marking that, too, as the smell produced by human organism in both conditions, is similar. According to current knowledge the dog detects the smell of toxins, i.e. ketone bodies that are produced during hypo- and hyperglycaemia.

The dogs are trained to keep signalling (marking) during an episode of hypo- or hyperglycaemia until the person takes action to change his/her blood sugar and tells the dog to stop. That is necessary for avoiding situations where the human being who is weak and confused due to hypoglycaemia, might send the dog away and fall into a coma. If a coma happens to occur, a good hypo alert dog is trained to solve the problem independently and seek for assistance from other family members or elsewhere.

In addition to marking, hypo alert dogs are trained to bring the owner a sweet drink or snack, so that the person can quickly raise his/her blood sugar level.

Diabetes mellitus, commonly referred to as diabetes, is a chronic metabolic disorder, in which case the pancreas either fails to produce enough insulin or has stopped producing insulin altogether, or the effect of insulin is insufficient. Insulin is essential for normal metabolism, as it helps body cells to absorb glucose that the cells use for producing energy.

One good option for keeping the blood sugar level within normal range, is the insulin pump integrated glucose monitoring system. Unfortunately, the blood sugar value that such devices indicate, is measured from the subcutaneous tissue fluid and is therefore slightly delayed, i.e. the displayed value shows the glucose level that was in the blood ca 10-15 minutes ago. Currently, the fastest assistant to indicate changes in human blood sugar levels, is known to be a hypo alert dog.

What are you looking for?